(by Michael Hofstetter, CUBbC President 2020/21 and Alumni Officer 2021/22, based on the article “Basketball and Beefeaters” by John McPhee)

We were delighted to receive two editions of the book “Pieces of the Frame” by John McPhee alongside with a personal note, as a response to one of our alumni newsletters. The book includes the article “Basketball and Beefeaters”, where John writes about his time with CUBbC. 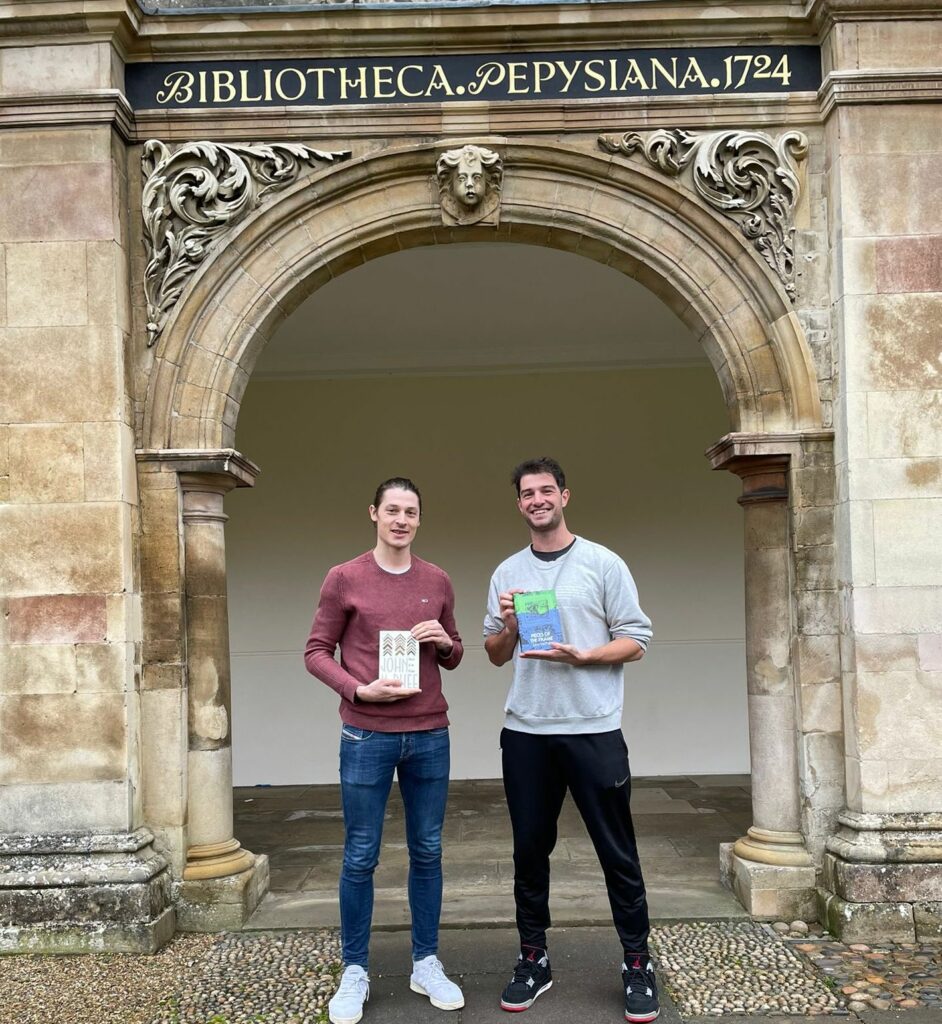 A personal note by John McPhee accompanying the books. 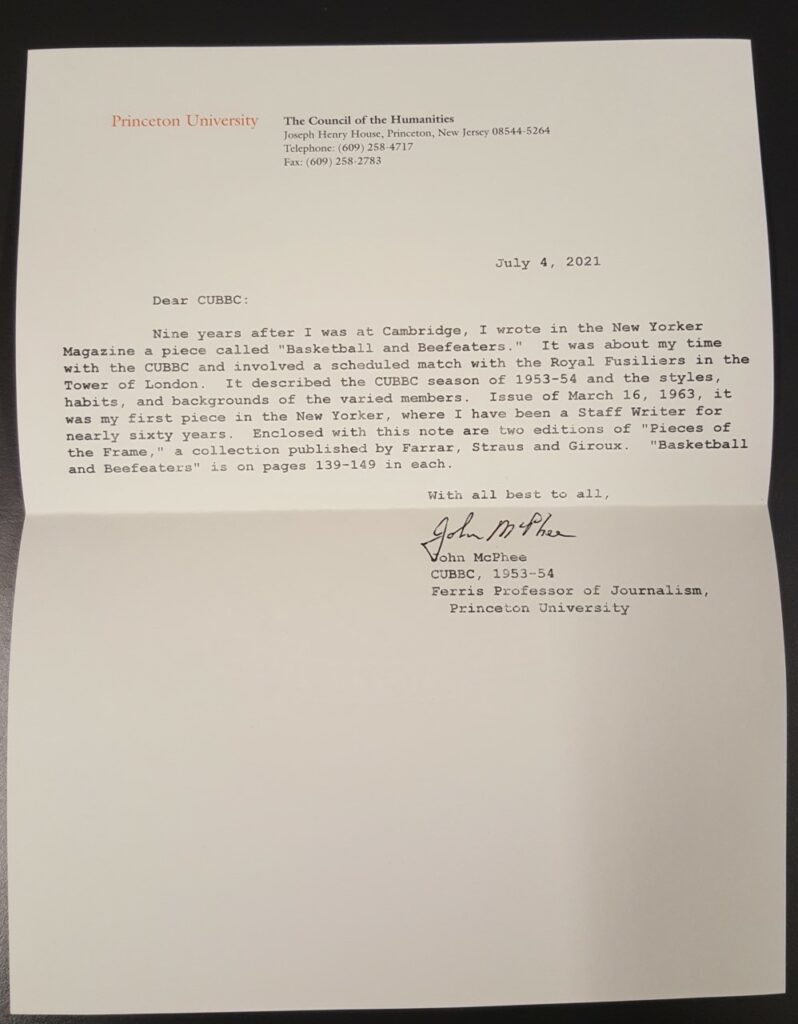 The following paragraphs are extracted from this article. They nicely sum up the season of 1953/54, and give a flavour of what it meant to play basketball for CUBbC back then.

“One season, during the middle nineteen-fifties, I was a member of the basketball team at Cambridge University. I had come there, after finishing Princeton, to read English literature, and I absorbed a fair part of it in the buses that carried us all over the Midlands to play our various matches. The building we played in was on the edge of the University cricket grounds. It served as a gymnasium, but the lettering over the entryway said “Department of Human Ecology”. I walked in expecting to see thirty thousand dollars’ worth of Fulbright scholarships running around trying to keep warm. Sure enough, the first person to introduce himself was Bob Pinckert of New York. The second was Russ Moro, also New York. But then I met David Thomas, Scotsman; Howard

Purnell Welshman; Tudor Johnston, Canadian; Dye Thomas, Englishman; Joe Romero, Filipino; and Dennis Solomon, from Trinidad. Before the season ended, we even had a man from Barbados. I was only the third American. There is a basketball club in nearly every town in England. The game was introduced there through the Y.M.C.A movement in 1934, the Second World War stimulated its growth and now there is an Amateur Basketball Association.

The first actual basketball I saw, as manufactured in England, was a disturbing sight. I suppose I was expecting at least a Voit Enduro ball out of a U.S. war-surplus store. The English ball was more like a surplus mine. Precisely, it was built much as a soccer ball is built, with the same thick leather, the same jigsaw quantity of small collected parts. Instead of going through the net with a swish, it would sometimes tear the net off. Dribbling was difficult, since the ball, to say the least, bounced unevenly. There was nothing in the English rule book requiring that a basketball be that way, so I sent back to Princeton for a contribution to Cambridge University, which was swiftly provided: three Spalding Top-Flite basketballs.

Unfortunately, there was no sending bac

k for a new gymnasium. The backboards, with their attached baskets were screwed into end walls of yellow firebrick, so that after a driving layup a player, unable to stop quickly enough, often collided with the brick. Naturally, these players were almost always our visitors,

since no one on the Cambridge squad would think of driving hard toward the basket even if he had a clear opening. We would usually stand back and waft long shots from safe distance.

We lost only one game in our own gym during five months of steady matches with other universities, clubs from various towns and cities, and service teams. […] In the first round of the annual tournament – the somewhat inexact equivalent of the American N.C.A.A. championships – we were hosts to a team from Corby, in Lincolnshire, and beat them 100-32. But the next and, for us final round was the one game we lost at Cambridge –  to the U.S. Navy team from Grosvenor Square.

We lost a good number of games played away from Cambridge, like Ruislip, Loughborough, and Oxford. Had we played Oxford at Cambridge, we might have kept the score close, but I think we would have lost anyway. Oxford’s basketball club was an exclusive clique of Americans. We were a sporting group. We always stopped off for a pint of mild after practice. The Oxford team was homogeneously composed of Rhodes Scholars, all of whom were dedicated to abstemiousness, exercise, and victory. They played hard, cleanly, and competently, and one got the feeling that they were representing a theological seminary.

Since Oxford had no basketball court of its own, its players used a floor at a nearby American airbase. It was in an immense hangar, heated by a jet engine that was mounted into the wall at one end. The engine drove a devastating blast of superheated air onto the court. Moving toward it – even if you were in the clear on a fast-break –  you were wise to stop and take a jump shot twenty feet away. The intense heat was spent, however, long before it reached the other end of the court. You could actually see your breath in the cold end. As a team, unfortunately, we were cold in both ends. We lost miserably.”

The story continues with a game against London School of Economics, where the referee was “as prejudice as a man has ever blown a whistle”, which caused the Cambridge side “watching L.S.E players miss foul shots”.

Finally, John McPhee describes how he contrived a basketball game against Her Majesty’s Royal Fusiliers (Beefeaters) in the Tower of London, and how it the game went down.

The full story can be read here: CUBbC 1953-54 based on JohnMcPhee story

In addition to John McPhee’s article, Dai Thomas sent a team photo from this year.

Dai Thomas further tells us that “Moro, Ufford, Pinkert (Captain) and McPhee were American; Johnston was Canadian;  both Thomases and Purnell (Secretary) were Welsh; Solomon was Jamaican;  Blackburn was English;  Romero was Phillipino;  Cope ? Australian, B R Hammond (Pembroke) is missing.”