The 1955/56 season: Cambridge beat Oxford for the first time

(image and text sent by Dai Thomas, added by Michael Hofstetter in January 2022)

The following memories were sent by David ‘Dai’ Thomas, who by the time of writing is our oldest alumni alive. He was part of the team that beat Oxford for the first time in 1956. In the years prior to that he was captain of the team and played along John McPhee.

It is a great honor for us that he is still connected to the club after so many years, and sending us motivational emails before our Varsity matches. Thank you so much Dai. 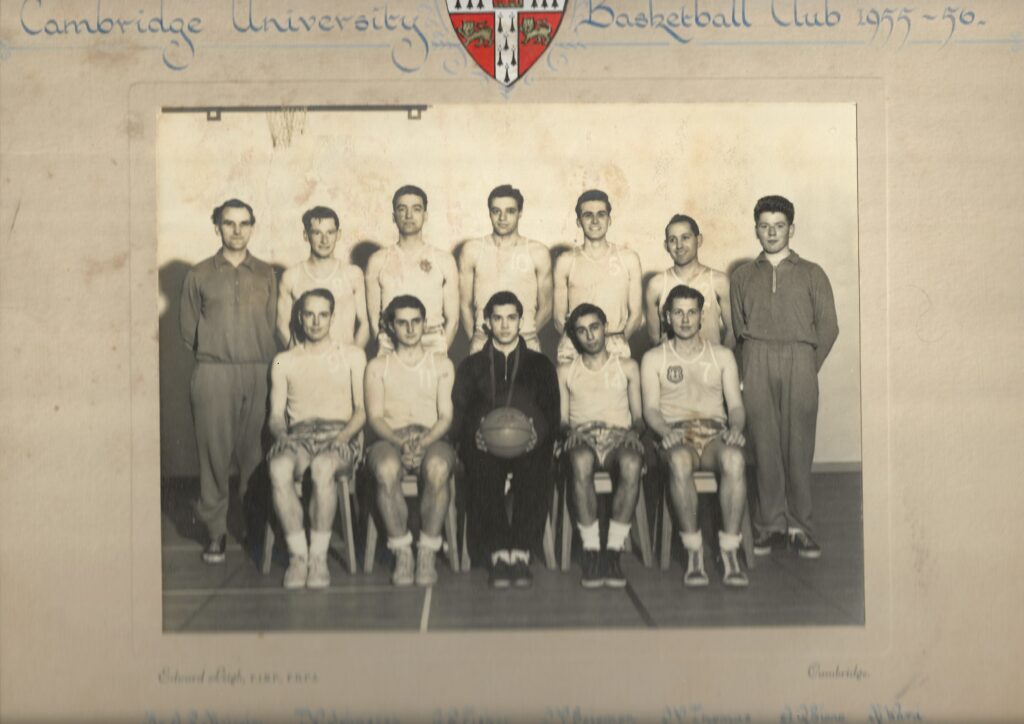 Alan Malcolm was the head of PE and in charge of the gym where we played.  Of the newcomers, Blane, Everhart and Bulger were American and El-Said was Lebanese. This was the team that played Oxford in the historic game at Lakenheath US airbase in 1956, although  I’m not sure all the players actually got on court.  It was such a close match that both teams  wanted their best players on court for as long as possible.  I might have a team-sheet amongst the documents I’ve not yet located.  Bulger and Hammond starred for us in attack, as did Blane in defense.  He was deputed to harry the star Oxford player, who was known to have a brittle temperament. The tactic worked, because both players got fouled-out early in the third quarter. My memory is that we didn’t take the lead until the fourth quarter, when it changed several times.  I didn’t get on court until well into the fourth quarter, as I was out of practice:  strictly, I should not have been playing, as I had suspected TB. I do remember missing a golden opportunity to score, when I’d got in behind the defense but failed to collect a bounce-pass which didn’t bounce as high as I expected on the concrete surface. I can still remember Mike Ward exclaiming “Oh Dai!!!” from the sideline!  But I did redeem myself a few moments later when I hared back from my forward position and managed to deflect an Oxford shot, with a hand over his shoulder, which would have given them back the lead had it gone in. The final score was 59 – 56 in our favour. We were particularly pleased to have beaten Oxford for the first time (as far as anyone knew) and just a few days after they had become English champions, or so it was reported. The fact that the losing Oxford team were awarded blues, and we, the winners, were not certainly rankled but didn’t spoil the pleasure. For me, it was good to bow out on a high, as I never played another game of basketball. I completed and submitted my thesis over the summer, married in September, graduated in October and became a professional astronomer at the Royal Greenwich Observatory, Herstmonceux, Sussex in November. The nearest basketball would have been Brighton, an hours drive away, and observing duties meant I couldn’t make a regular commitment, anyway.  So I took tennis seriously instead, and was still playing up until the first corona-virus  lock-down 64 years later.

You asked if I knew anyone who might have knowledge of subsequent “Varsity” matches.  We never called them that, I think because many of our matches were against other universities.  So it was always “the Oxford match.”  I’m afraid I have outlasted all my contemporaries with whom I was in subsequent contact.  Mike Ward died a few years ago, and he was in contact with  Tom Everhart, who subsequently became head of a college of some sort in Santa Barbara, California.  I think he told me that Tom had died, but he could possibly still be alive.  I was very close to Barrie Hammond, but he died a tragic death aged only 38. Howard Purnell was professor of Chemistry at Swansea University when he died suddenly  in the late 1980’s.  As Swansea is my home town, we often met when I was in Swansea.  We were actually discussing the possibility of a Cambridge basketball reunion at the time of his death.  Gordon Fisher became a lecturer in Statistics at Southampton University.  I was never in touch with him directly, but I used to hear of him from a colleague of his whom I succeeded as captain of the Glasgow University basketball team.  Gordon was still playing basketball in his 40’s, I believe, but that was a very long time ago!

I think that’s about all I can tell you at the moment.  I have a few action shots of basketball being played in the old gym in Cambridge – mainly of interest because they show how cramped it was.  I will copy these for you when my local photo shop reopens for business.  There are also some bits and pieces that I haven’t yet been able to lay my hands. I also have a photo of the 1952 Welsh team that played the then Scottish champions, Maryhill,  in Newport in late 1952.  If you are interested in the history of Scottish basketball, Sandy has much more information than I have, but I do have team photos and memories from the 1948-52 era. With very best wishes – and do keep in touch, as I will when I have anything more that might be of interest.